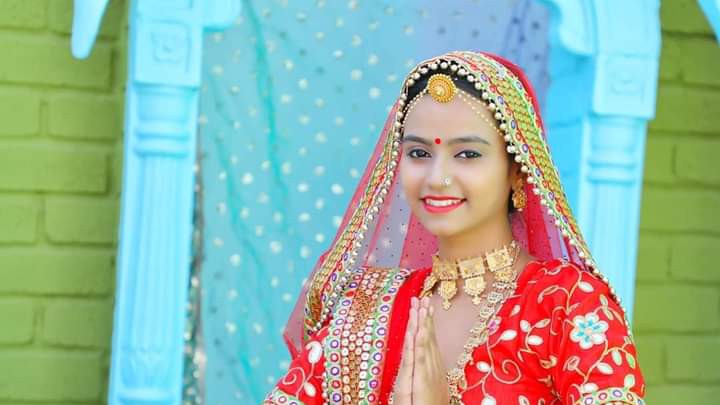 There have been many such artists in Rajasthan, who have made their name in the field of music, dance and comedy, but very few are artists who have made a mark in the hearts of people on the basis of their artistry.

Today we are going to talk about an artist who, since childhood, believed in his work and at a very young age, walking in the footsteps of his father, has illuminated his name all over India.

Today, what we are talking about is Sonal Raika , who works in Rajasthan’s largest music company prg film studio, he got a lot of recognition through his comedy too. People also know him by the name of Sona Babu and Jhamkudi .

Sonal Raika had a great love for music since childhood and also had a great affection for dance when her father noticed that there is a big artist hiding somewhere inside them, so he started taking them to the events with him. Sonal Raika started giving his performances through the songs dancing there .

In this manner, he mastered the art of dance with all his hard work and dedication and started earning his name all over India. Apart from Rajasthan, where the migrant Rajasthanis live from other states, invitations to perform night awakening and programs started coming and their fame spread like this.

Sonal Raika started giving presentations with her father at just 10 years of age and in this manner, her hard work and dedication led her to the point that today her name is taken in the field of art in the entire Rajasthan.

After that Sonal Raika spoke to Sajjan Singh Gehlot , director of PRG Music and Film Studio and started working here. Here, due to tireless efforts of Sajjan Singh Ji, he got a new identity and his videos started appearing on YouTube. After that he also started doing comedy which became very popular.

Sonal Raika got her real recognition when she started working at PRG Music and Film Studio, she got a good recognition here through the Ramkudi Jhamkudi program in which she worked with Pankaj Sharma .

Today Sonam Raika is at a stage where every artist’s dream is to reach, despite many difficulties, she achieved this position and prioritized her work with full dedication. Because of this, as a Rajasthani artist, she has left a different mark in the hearts of people.

Sonal Raika was born on 17 March in Siwana , Garh in Barmer district of Rajasthan . His nicknames are Sona Babu and Jhamkudi , a name he got as a comedy in PRG Music and Film Studios.

Sonal Raika’s father’s name is Hamira Ram Raika , who is a famous artist Sonal Raika was also brought to this area by his father, his family consists of his parents and his brothers, who received their education from Jodhpur. Presently, his residence is in Jodhpur .

Sonal Raika is not married yet, she is still unmarried, whose special friend is Twinkil Vaishnav who works with them in PRG.

Every artist’s life is full of struggles, in which he achieves that position with all his hard work, he wants to reach this point, all the artists are trying to achieve that level with all the effort, with their efforts, many If all the artists achieve this milestone, then some people only dream of reaching here.

But Sonal Raika have achieved this position by virtue of hard work and struggle and Rajasthani over as artistic Rajasthan recognition.

First of all, his father felt that my daughter has hidden a lot of artistic work which I have to take out because at that time Sonal used to have a lot of interest in dance, because of which her father felt that this would go ahead for himself and my society The name will definitely be illuminated.

When his father felt that Sonal’s talent should be shown in front of people, he started taking him along with him to the programs and from this Sonal Raika got a different identity of his own. Sonal started dancing and singing on Raika Mach.

Gradually, their dance started to get a lot of praise, then they started calling programs from other states besides Rajasthan, where their migrant Rajasthani brothers and brothers live. After this, gradually they left a different mark in the hearts of people with great hard work and dedication. In the same way, his programs continued.

Sonal Raika finally got a stage, where she got her real identity, she joined PRG Film Studio and it was further developed with the support of Sajjan Singh Gehlot ji . She initially worked in the wedding song, Rajasthani Video at PRG Film Studios, after which she also made her foray into the field of comedy. He made his comedy debut with Twinkle Vaishnav and Pankaj Sharma . In which he played the role of Sona Babu .

In the form of Sona Babu , she played a great role and played her character really well. In the same way, he worked on comedy as well as Rajasthani album and made a different identity of his own.

It was in this way that there was a lot of recognition about joining PRG Film Studio . Whenever there was a big Rajasthani program, Tinkle Vaishnav Sonal Raika and Pankaj Sharma were definitely called and where they did the program, there would be a crowd of millions and people would come to see them and listen to their program. People come from many kilometers away.

In this manner, Sonal Raika , with her dedication and hard work, illuminated the name of herself and her society and today she became famous all over India as a successful artist. On behalf of our team, Sonal wishes Raika that he will achieve new heights in this way and fulfill all his dreams and illuminate our Rajasthani culture and art.

Sonal Raika has many achievements, she has received awards for advancing Rajasthani art and culture from many forums, she is respected and loved by the people for her art.

Sonal Raika fulfilled all his dreams in his life, which his father and he themselves saw. Sonal Raika kept Rajasthani art and culture alive and intact.

Sonal Raika ‘s greatest achievement comes from the immense love and affection of the people, which is visible in their programs and videos.